Dodaj komentarz:
Udostępnij:
Here they are! James Szymik and Robbie Marr - two Englishmen who traveled 1000 miles on their bikes - finally reached their destination. They arrived in Lodz on Thursday afternoon.

It was grand finale of grand journey. James and Robbie travelled 1000 miles from London to Lodz. It took them 10 days, they were riding through four countries and spent 80 hours in saddle. But all they said, as they have arrived to Manufaktura - big shopping mall in Lodz - was: it was worth it.

Thanks to their outstanding effort, they managed to gather over 2000 pounds. All this money will help develop rugby league in Poland. It will be spent by Lodz Magpies, rugby league team from Lodz. Thanks to them, Polish players can travel to Czech Republic, to participate in international rugby league tournament.

- It was very, very long bike ride - said James Szymik on the Manufaktura market, where he and Robbie Marr were warmly welcomed by members of Lodz Magpies team. - We are expecting much from pubs in Lodz - added Robbie, laughing.

After evening of relax, sightseeing and drinking some polish beer, James and Robbie will take coaching session in Manufaktura on Friday. They will teach Polish youngsters about rugby league and their amazing journey. 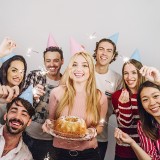 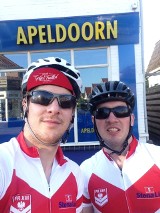 On the second day of their trip, James and Robbie have ridden 104 miles through Netherlands. "I wasn't expecting it to be this tough" - says James Szymik.

James Szymik and Robbie Marr travelled 90 miles from London to Harwich. It was the first day of their 10-day bike trip from London to Lodz, Poland. Their goal:...

Yulia Marushevska: Ukrainians believed they had the power to change something

Yulia Marushevska, the Kyiv Ph.D. student and EuroMaidan Revolution activist who made the viral YouTube video "I am a Ukrainian", speaks about the Maidan...